Richard Dawkins, an English ethologist and author is an atheist and well known of his criticism regarding creationism and intelligent design. Dawkins has long been a proponent that intelligent life was not created by a supernatural creator and stands against religious faith, calling it a “delusion”. Amongst which, one of the books that were highly acclaimed for was his book “The God Delusion”. Now if you are a highly religious person, reading this book will not jeopardise your religious beliefs in any way. Instead, Dawkins uses logical statements and facts to explain his thought processes and leaves the conclusion up to you. Without further ado, let us take a look at one of his comparisons of a deity to ‘Binker’, an invisible friend.

Now in his book, Dawkins adds a poem by A. A. Milne about an invisible friend named “Binker”. The point he was trying to convey across was that lots of children have invisible friends and they imagine them out, as a means to provide companionship. Adults are not very different and the fact that they possess a higher level of logical thinking and knowledge may result in them creating a God in their minds. The term Dawkins used was “paedomorphosis”, or the retention into adulthood of childhood characteristics. Dawkins was trying to bring across the point that religions could have evolved over the generations through a slow process after a child gives up on their invisible friend. The similarities are akin, with both Gods and “binker” having the power to comfort one and provide a direction for one’s moral compass (although an invisible friend acts more like a sounding board for testing one’s ideas). 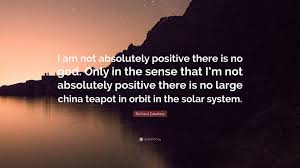 Dawkins, a man of academics, did not fail to consider the inverse, that children created invisible friends because of a faint perception that they had regarding the supernatural. Although this is highly unlikely because their construct of a God in their mind is likely to be faint, Dawkins concludes that this is less likely to be true and that deities have a higher chance of evolving from invisible friends.

To end off his point, Dawkins questioned the need of invisible friends (and in turn Gods/Deities) because the consolation they provide does not equate to the feelings one truly feels. To prove a point, he talks about how many individuals believe that they will live on after death yet simultaneously fear death and cry about it at funerals and protest against euthanasia. Adding to that, he posits the contradiction that many humans who believe in a God and heaven are postponing the event of them going to heaven for as long as possible, preferring rather to live on.

Uncover the logical reasons behind why Richard Dawkins believes that God doesn’t exist. Get your copy at Book Depository today, shipping is free.