Competition: Friend or Foe In The Modern Society

In recent times, several cases of hacking incidents in SMU have brought about the debate about the competitivity in Singapore’s education system. Just last year, a Vietnamese scholar studying in SMU was jailed for 16 weeks for hacking into his professor's accounts to change his grades. Such an aggressive and impulsive act that was even conducted makes us truly think: Is competition really so competitive such that our moral compasses are being blinded through it all? Or is there a way that everyone can benefit from active sharing and learning of knowledge.

Since the beginning of time, competition has existed in the human civilisation in various forms, much less in studies in today’s context. Humans competed against animals for food and shelter during the caveman era while cities were pitted against each other for land. Even Darwin proposed that survival of the fittest was an essential part of life, something that will always be ongoing. The real challenge here is defining how far we are willing to go in this competition and whether or not it will define us or even erode our moral compass. Everything is by and by, relative. And this could mean that whatever we do is justifiable only through our perception of things.

In the case of the student that was willing to go the extra mile to hack his professor’s computer, perhaps the only justifiable case would be that his grades were worth more than his morals. The student clearly valued other things above honesty and integrity, and only he could see the reasons for his action. In a society where people value all things good and perfect, simply choosing to ignore the fact that behind all these facades, lies an ugly truth about the world, who are we to judge the actions of others? 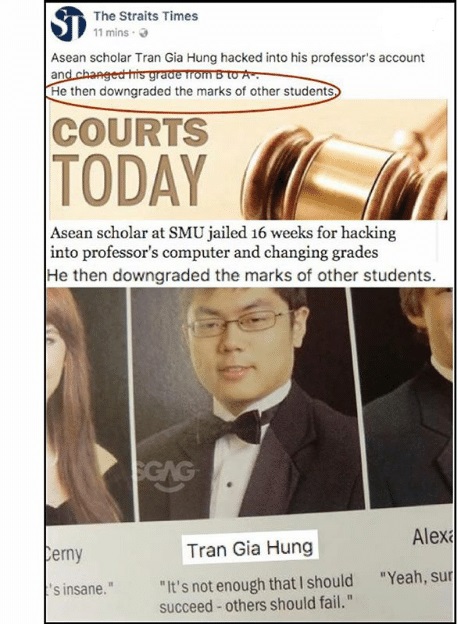 Yet with this logic, we will never be truly satisfied with the things that lie around us. To really thrive in this world, there has to be a fine balance between competition and one’s defining values. How far we are willing to go should always be paced with being able to live with ourselves. There really isn’t a point in choosing the material competitiveness over our very own conscience at night and thus the real problem we have to deal with is within ourselves.

In conclusion, competition is necessary for growth in today’s society, and whether or not the general population agrees on the boons of it, it will continue to blossom. As a responsible person, we should always aim to set our moral compass right and not let it be eroded by vices, negative thoughts and emotions that will result in an ethical dilemma. We have to think about the bigger picture in life sometimes, and how it will affect us and the people around us. In spite of all that, we have to ensure that we do not stagnate in our progress and achieve a better version of ourselves every day.