If you’ve ever wondered how some people could behave so brutally in the face of other human beings, then this article will break down the human psyche for you. There are just an insane amount of opportunities for these to take effect, from being in the military to working in a corporate environment. Most notably, the reason why certain people are able to rise to the occasion is not so much because they have the inherent ability that allows them to succeed tremendously, but because the environment and their roles have inadvertently transformed the way they operated. Without further ado, let’s take a look at the Stanford Prison Experiment that caused a paradigm shift in the way people saw their occupational roles in life.

The test first started with the hypothesis that one’s inherent characteristics were the primary cause for their abusive behaviours when placed in prison. Before going about with the experiment, 24 participants were first selected to be placed in the experiment and told beforehand that they would be participating in a 14-day prison simulation. All participants were free from criminal backgrounds and were psychologically stable, white and of the middle class. Half of the prisoners were randomly assigned as prisoners while the other half were chosen as prison guards. Living quarters for the experiment were vastly different, with the prison guards living in lavish conditions with areas for relaxation, rest and other material comfort. The prisoners, on the other hand, were separated and lived in fabricated walls and cells with only a cot for their sleep. 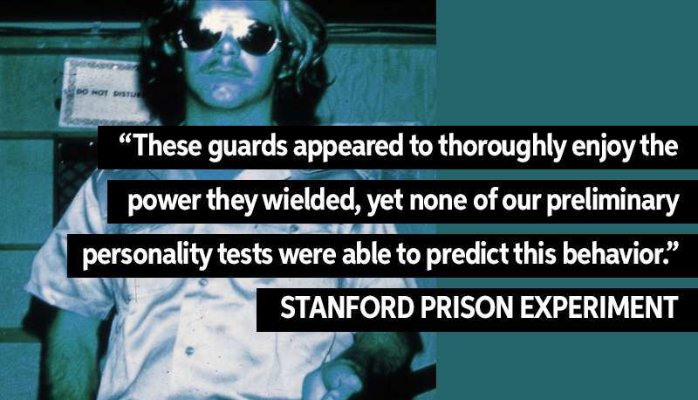 From the very beginning of the experiment till the end, everything was held in as close a fashion as could humanly be possible with actual prison scenarios. The guards wore similar uniforms as prison guards and held on to wooden batons. Their instructions were clear: Create feelings of boredom, fear and a sense of control by the system. The one rule stood clear - that no harm was to befall the prisoners and they could not be withheld from food or drinks.

Prisoners, on the other hand, were “arrested” straight from their homes and even had their mug shots taken by the police. Upon arrival at the station, they were then given ill-fitting clothes and chains to be worn around one ankle. The guards even called the prisoners by their assigned numbers during the experiment.

What ensued was probably one of the most shocking revelations that anyone could even imagine. Starting from the second day, prisoners rioted and one even began to “act crazy” from the brutal treatment he received. It was only upon further inspection that the scientists realised that the prisoner was indeed suffering and needed to be released. As the days grew longer, the guards and prisoners alike began to grow more absorbed into their roles. The guards began increasing corporal punishments, exacerbated sanitary conditions and even begin to get involved in degrading punishments. The experiment escalated to such conditions that the experiment had to be stopped after 6 days. Alas, it was firmly concluded that situational attribution was the main contributing effect over dispositional attributions when it came to the way one would behave, react and think.