In a multiracial country like Singapore where one can find almost any religion around, it is inevitable that you will hear about Pascal’s Wager being brought up by religious people as a reason for believing in God when Atheists question their motives. Although the flaw in their argument has long been criticised by naysayers, it is still a flaw that cannot be addressed. Without further ado, let's take a closer look at who Pascal is and what exactly is the “Pascal Wager”.

Pascal was no ordinary person and was born a child prodigy with a background in math, physics, Christianity studies as well as being an inventor. He dabbled in many areas of math including probability, geometry and even modern economics. What made Pascal so outstanding was because of his many inventions and discoveries in the field of philosophy, literature and his belief in religion itself. It wasn’t long before he came up with Pascal’s Wager that became ground-breaking at that point in time.

Pascal’s Wager was based firmly on his belief in God and states that a rational person should live and believe in God even if God doesn’t actually exist. This is so as the person only stands to lose a finite number of luxuries whereas they would subsequently gain a whole lot more in the afterlife as opposed to spending an eternity in Hell. Despite his mode of thinking being simplistic and assuming multiple factors, it was considered ground-breaking back then, charting new paths to probability theory with topics such as existentialism and voluntarism. 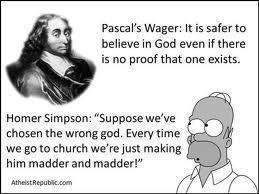 The Flaw in the Argument

As time went on, criticisms of Pascal’s Wager soon became apparent as people developed their examination and critical thinking. The flaw lies in the fact that there are really thousands of religions in the world, each with their own God. What are the chances that we would choose the wrong God and end up in an afterlife where another God is in charge of the said “heaven”? This would inadvertently result in us being banished to hell unless the God was forgiving. But then again, if the God was forgiving, wouldn’t it forgive you for not believing in any God, to begin with?

Rightly so, there exists yet another modified version of the Pascal’s Wager, which seems to make a little more sense. Instead of believing in a God, one should choose to live a good life and be a kind person in all aspect, leaving out religion. If the God in the afterlife is actually loving or kind, then it will understand and reward you in the afterlife. If, however, the God chooses to banish you to hell for not believing in him despite you being a good person your whole life, then it serves to confirm your choice of not believing in a God as it is unjust and thus shouldn’t be worshipped to begin with.

In conclusion, we should take this wager with a pinch of salt and live our lives however we define it to be. Whether or not there are consequences in the afterlife, we are ultimately responsible for the way we live our lives so there will be no regret in the end.