The First 20 hours by Josh Kaufman

With multiple books teaching you how to gain mastery, Josh Kaufman presents a radical idea that teaches one how to develop rapid skills in the shortest period of time. This goes against the principal of Malcolm Gladwell’s 10,000 hours to mastery but is definitely an interesting read for everyone. The main point of the book is that with just a little bit of planning, anyone and everyone is able to learn anything with just less than 20 hours of focused and fixated effort.

The book has three different sections. Mainly learning, practicing and finally examples of putting the first two chapters to use. Starting with the Ten Principles of Rapid Skill Acquisition followed by Ten Principle of Effective Learning, Kaufman motivates the user to be excited about learning something new and sells you the idea of how simple learning can be if you plan it well. Skills acquisition is then cemented with methods that Kaufman proposes. 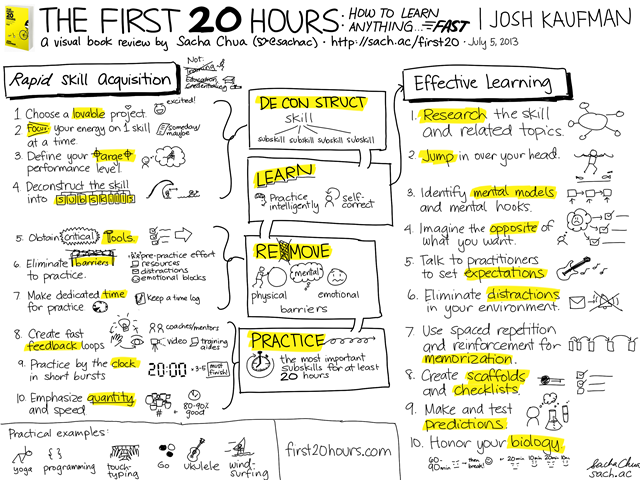 The final chapter is all about examples and how Kaufman taught himself six vastly different skills in just under 20 hours of training. He gives a really detailed breakdown of how he utilizes the principles in the book and can be really helpful for people who learn better from examples.

To put into perspective some of the key ideas which Josh Kaufman brings across in his book, here are some of the rehashed ideas on how to master a skill in just 20 hours:

In the early stages of the acquiring a new skill, you have to really put in the effort to understanding and researching about your new skill. After breaking it up and being able to practice it on a regular basis, you’ll then be able to master the skill more efficiently. Ultimately, the end of skill acquisition is when you're able to perform the skill without thinking about it. Many people struggle to hit this stage, even with more than 20 hours of practice so it is imperative to nail this aspect within the first 20 hours. The book may have its criticisms from the public on the oversimplification of learning a new skill, but the idea is rather feasible and could definitely be utilised to at least help speed up one’s learning curve.