Ray Kroc: Grinding it out

When people think about McDonald's, they may not think about Ray Kroc, the American businessman who successfully transformed a small-time hamburger restaurant into a huge franchise outlet that spans across almost every single country in the world. Ray Kroc was one of the most successful businessmen but was in fact not an entrepreneur from a young age. Kroc started out working for others in a variety of different jobs, including selling paper cups, being a real estate agent and even playing in bands for occasions.

His journey for McDonald's started only at an older age of 50, right after the end of world war 2. Kroc was working as a milk shake mixer salesman when he chanced upon the San Bernadino McDonald’s restaurant which bought a relatively huge number of mixers from him. There, Kroc was so impressed with the operations that were happening in the restaurant that he suggested to the brothers about opening new stores across the city. At an age of 50, many people would be daunted with setting up a new business; But Ray Kroc was not such a person. Having been an army veteran, one that was plagued by various illnesses and injuries from the early part of his life, his age never held him back one bit. Kroc was convinced about the business and this conviction filled him with a drive that pushed him onwards nonetheless. 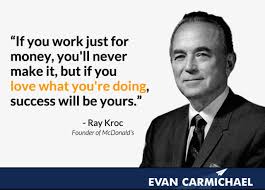 Of course, no successful journey would be without its own fair share of adversities. Kroc was plagued with obstacles from the very beginning, with objections from his first wife who was averse to risk, failing businesses on the side and investors who had lost faith in him. But endurance and foresight is something that every budding entrepreneur must have and that was what Kroc had. Kroc dropped everything around him and focussed his attention and intentions on building McDonald’s into what it is today – a giant in the fast-food industry that is adaptable to change.

It is important to note that Kroc utilised the countless number of experiences he had when he was working for others in the earlier half of his life, utilising the trends he observed and thus being able to make astute judgements when it comes to businesses. His work ethics itself were a sight to be, having been cultivated since earlier on in his career, working on an average of 19 hours a day with barely any rest days. Even after establishing McDonald's, Kroc would often phone the managers to check on the progress and operations of their outlets to ensure everything was running smoothly. More than that, Kroc was a progressive man, one that was quick to spot trends and move with the times. This proved inevitable in creating a successful business and one that not many people were willing to make the move towards.

If you’re a budding entrepreneur, it is essential that you give this book a read. Not only will this give you a new perspective on building a business but reinforces the point that age doesn’t matter when it comes to building a business. More importantly, experience, tenacity and a strong belief in what you ’re doing is key.