Left For Dead: My Journey Home From Everest

If you had a second chance at life after being close to death, would you finally start taking action and doing the things you’ve put on hold for too long, or be less afraid to show your loved ones you appreciate them?

For Everest survivor Beck Weathers, it was the latter. In his autobiographical book, Left For Dead: My Journey Home From Everest, Weathers reveals the ways his life has changed after miraculously surviving the 1996 Mount Everest disaster. If you’ve watched the movie Everest, you’d probably have an idea about what happened during this Everest catastrophe that took a dozen lives.

During a blizzard on Everest, Weathers was abandoned by his fellow mountaineers and – as his book title suggests – left for dead, due to the condition he was in at that point (he was in a deep hypothermic coma and pronounced dead).

However, he miraculously regained his senses after spending 18 hours in subzero temperatures on the mountain. Upon “waking up”, Weathers summoned all his courage and determination, eventually finding his way back to camp. 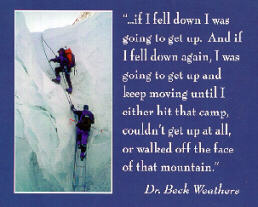 Unfortunately, the price that Weathers had to pay for his survival was both his hands and nose. Due to frostbite, he had to amputate his hands as well as undergo more than ten reconstructive surgeries for his face. But these weren’t the only wounds he had to heal.

Before Everest, Weathers spent a great deal of time away from home while on his quest to conquer the Seven Summits. As a result, neglecting his family and causing his marriage to be on the rocks.

In the later parts of the book, he talks about how he focused on salvaging his damaged relationships, coping with depression, as well as getting his life back on track.

Ready to get inspired? Then grab a copy of this book – it might just be a much needed wakeup call to not take your loved ones for granted.