With the high penetration percentage of social media usage in Singapore, it has truly become something nasty to deal with especially for parents of young kids. Many of you would remember your primary school days running around and playing with your friends instead of fixating your attention on the phone in your free time. Even worse still is the ability of kids to lose their attention span at an ever-increasing rate, leading to drastically poorer results during examinations and more. It doesn't help that Singapore has one of the highest internet speeds in South East Asia (SEA) with 18.2mbps, almost two times that of the world average speeds. As Singapore paves the way to achieve an even stronger communications nation, parents can expect almost an entire population of kids being hooked to social media. So how exactly do we control our kids when some of us as adults too have a problem with social media usage?

Firstly, parents should be following their kids on their social media accounts to see what they are posting. In the age where kids are increasingly getting exposed to all sorts of content, there tends to become a phenomenon where they too begin to get influenced by it. One of such behaviors includes the prevalence of high school students fighting being posted on Instagram. This is extremely disconcerting, especially since young kids think it may be “cool” to get into fights, resulting in constant provocation and a need to solve problems with their fists. Parents should be aware of the contents that their children are watching and posting on their social media, and put an end to materials that are not conducive for their growth. 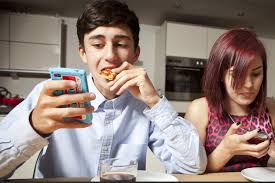 Another problem that should be dealt with is the amount of time spent on social media usage, to begin with. As parents, you can’t entirely be sure when your kids are using their phones, especially if they are allowed to bring it to school. Instead of confiscating their phones, parents could instead limit the amount of data that their kids are allowed to have on their mobile phone plans. A simple 1gb per month would only enable them about 32mb of data per day, which could roughly translate to a quick 15mins browse on Facebook or Instagram. If your kids are in secondary or primary school, there won’t be any worry that they could bypass this restriction with WIFI.

Finally, parents should understand their roles through leading by example. Don’t spend time on social media sites in front of your kids and better still, show them the kind of content you are satisfied with them posting by letting them see the content you post. Impart in them the value of checking their social media accounts only at night or after they have completed all of their work. There is nothing more detrimental than getting distracted from your task due to a social media addiction. With these tips, you should better be able to control your child’s social media usage and not worry about them getting into all sorts of problem due to the prevalence of technology in Singapore.