Aliens have long been a debate amongst the human race, and whether or not life outside of earth exists. Most certainly, many conspiracy theorists claim that strange sightings and unexplained events across the world are due to aliens and their foreign technology which are far superior as compared to us. Of course, with the many different theories present, we humans could be aliens ourselves, seeing that our adaptations are so different from that of the planet Earth.

One key argument of whether aliens had existed dates back to before pre-civilisation, where it has been thought that the ancient pyramids that are built countlessly across the world are only through the help of something foreign. In addition to this, many governments were covering up evidence that suggested an advanced civilisation in the past were behind the construction of such pyramids. This included countries other than Egypt such as China, Alaska and even the United States of America. 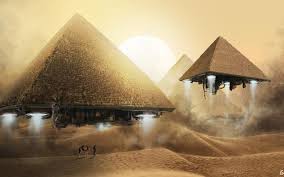 The ancient Peruvians were one peculiar example of an ancient civilisation that were overtly obsessed with the creation of pyramids. With over 200 pyramids built within the small country of Peru, they estimated that it would have taken years of work involving almost every single capable man alive to aid in the construction. Oddly enough one of the few pyramids around had an image of a bird man which claims to have been connected the pyramids to space travellers. It would also explain why and how easily the pyramids were built if foreign intervention was provided with advanced technology.

Now with all these being said, how exactly do UFOs connect to the many pyramids that are built throughout the world? Well, according to experts of the field, UFOs too require charging of their energies to continue on their long expeditions and thus they require the use of earth energy and ley lines. Pyramids function by generating energy fields and providing the UFOs with much needed energy. This could very much explain the lines and glyphs found on the walls of countless pyramids throughout the world, which has till date been unexplained by scientists.

Other Forms of Aliens

Finally, a type of alien species known as the greys have long been thought to be living with us, from long before the primitive mankind. They arrived on the Earth billions of years before us and were the very ones who taught human how to build pyramids and other structures. Adding to this are various paintings that show individuals with unnaturally large heads and slender bodies, proving that there could have been instances where these individuals truly exist. Indeed, humans are not all knowing and facts are merely things that we have proven with time and our technology. Whether or not aliens truly exist, only time will tell.