Here in Singapore, where it is the second nation in the world with the most diabetics, it is ever so imperative to take care and precaution in order to prevent such an unfortunate disease from striking. From new statistics taken just last year, 1 in 9 Singaporeans has diabetes and that is indeed a truly troubling problem for a developed nation like Singapore.

There are two main types of diabetes that people should be worried about, the first being type one diabetes. This is an autoimmune disease that causes the insulin-producing beta cells in the pancreas to be eliminated, resulting in a lack of proper insulin regulation in the body. The first type of diabetes is the less common one, with the cause of it still being unknown in the medical world. The second type of diabetes is the more serious one of the two, as it is a metabolic disorder and is developed due to one’s eating habits. This happens when the body’s hormone insulin is not able to effectively limit the blood sugar level in the body due to resistance. The result is rising blood sugar levels that can lead to heart disease, stroke, kidney damage and even nerve damage. 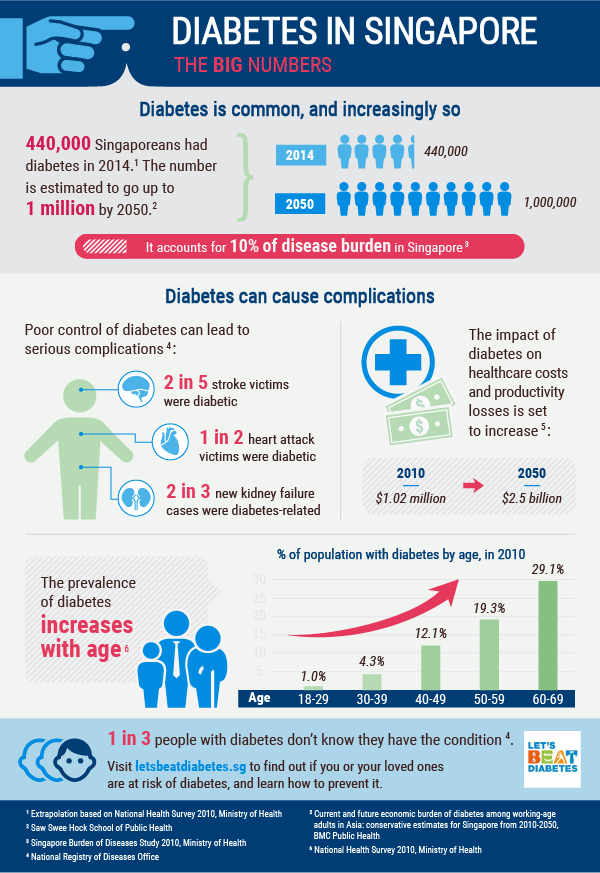 The most important take away from this should be what Singaporeans can do about preventing diabetes or even reversing it (there have been multiple cases of patients with type-2 diabetes reversing the disorder). Without further ado, here are the three tips for staying clear of diabetes:

1. Stop having a diet high in glucose

Consuming large amounts of sugar every day is one of the most well-known culprits of developing type 2 diabetes. For one, it increases your body’s resistance to insulin, resulting in high blood sugar levels. Stop consuming copious amounts of refined carbs such as white rice and eliminate soft drinks from your diet.

2. Lose weight if you are obese

People that are obese have a much higher chance of developing diabetes due to their visceral fat. This increases inflammation in the body as well as insulin resistance which leads to the increased risk of diabetes. Losing weight can be easy with simple dieting and you don’t have to stress yourself out. This brings us to the next point.

Exercising on a regular basis is probably one of the most important points aside from having a diet low in glucose. Not only does regular exercise increase one’s insulin sensitivity in our cells, but it can also help one to lose weight. The type of workout doesn’t matter so much as long as it is performed frequently. Research has shown that insulin resistance decreased due to exercise, but only on days where the participant worked out.

In conclusion, diabetes can be a scary disease to have, but through a healthy lifestyle, the chances of one getting it can be significantly reduced. If you know a loved one that is at risk of getting the disease, get them to go for a blood sugar test at their nearest polyclinic and adopt proper measures to keep their health in check.