Commentary to Josephine Teos Remarks on Having Babies

As with all powerful leaders in Singapore, there is always one cabinet member that diverges from the typical Singaporean with their thinking, leading to some comments that are not taken so lightly by Singaporeans. In a recent interview and news article posted by the Straits Times, Senior Minister of State in the Prime Minister’s Office, Josephine Teo, commented about married couples having children before getting a flat of their own. Of course, her usual flamboyant and brusque usage of conversational English sparked off outrage on social media and amongst young married Singaporeans who got triggered by her ideas on the law in Singapore. Most particularly memorable would be her comment that “sex in small spaces” is all that is needed.

However, as we continue examining the article and interview with Senior Minister of State, Josephine Teo, we find her logic getting more and more flawed as she continues rambling on about the housing and parenting situation in Singapore. The very first blatant fallacy which she employs involves comparing Singaporeans dating to the Western countries like UK, France and in the Nordic regions. It is true that pre-marital sex is rather prevalent in the west, bolstered by the media and other platforms and making it a norm. But to simply think that having a baby immediately upon meeting your other half on the first night is quite a huge assumption to make. I sincerely doubt that any sane and rational person regardless of their preconceived notions of society would aim for a baby when having sex and meeting the opposite sex for the first time. 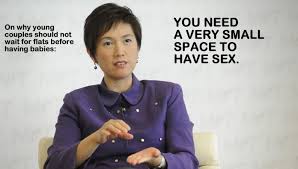 The second flaw in her argument is that the west “don’t have to worry about marriage – that comes later”. Have you ever wondered why marriage isn’t as focussed on overseas as it is in Singapore, besides the usual personal preference? Well, the simple answer is incentives! Incentives or rather a lack thereof is what makes people overseas not rush for marriage. You can’t compare Singapore to the west when the policies and benefits for married Singaporeans far outweigh that of those overseas.

Also, to add on the part where both parties have their own family and would live in either parent’s home by compromising, that remains largely not the case. In a recent survey back in 2015 of the distribution of households by size in the EU, a whopping 31% of households were owned by people living alone, with three or more people having a significantly lesser percentage. How does that even prove that many of the westerners are living with their parents or even have their spouse living alongside their parents in their house?

Finally, although the statement that having sex does not require much space is true, that doesn’t mean that everyone is comfortable with having it. Singaporeans prefer to have a home of their own because it means privacy and the creation of their future. They don’t have to deal with their folks or suit their parents’ wishes when it comes to décor and frankly speaking it doesn’t only apply to Singaporeans.  In a country where the people pride themselves on their world class education and critical thinking, it is truly disappointing that a state minister could throw out such statements casually in an interview when she knows it will be reaching huge coverage across the country.