It’s not every day that you see retailers trying to use technology to improve the experience of shoppers, but Amazon has outdone itself yet again. With their recent launch of Amazon Go, a brick and mortar grocery store concept that revolves around the idea of the removal of checkout lines, buyers will no longer have to worry about long queues any longer. The grocery store works by having shoppers scan their smartphones with the app at the gantry point in the store, before going about their usual routine and picking up their groceries. Shoppers need not do anything else because the sophisticated system tracks everything, from when you pick a food item up, or when you decide to put the item back on the shelf.

According to Amazon, the store works through a combination of artificial intelligence, computer vision and data pulled from sensors all over the store to allow customers to be charged for the items that they select. Although problems such as common theft have yet to be touched on, it seems that Amazon is pretty confident of their technology behind the grocery store. Unfortunately, Amazon Go is only open to their employees now and still in beta testing mode. According to the company, the official store would be open to the public in early 2017 although plans for future stores are currently still unknown. Should the technology prove to be both ideal and efficient, we could very well be seeing the future of shopping right here at Amazon Go first-hand. 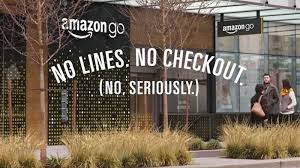 It is insane to think that just over a year ago, self-checkout counters started to gain popularity in grocery shops like NTUC, Giant and Cold Storage. Now, there’s already technology for people to walk out without even using cards to pay for their items. No doubt Singapore is progressing towards its goal to become the smart nation in SEA, but if we truly intend to make good of our work, more has to be done. Nonetheless, the recent implementations of self-checkout lines have started to see really good results, with grocery stores seeing a decrease in lines during peak hours. But more could still be done to really solidify the technology. For one, shoppers that may not be so tech-savvy may find the new checkout system to be rather daunting and in turn avoid it altogether. The focus that our country should adopt could, therefore, be more towards embracing new tech altogether, instead of merely implementing it.

The outcome is clear, however, that amidst all the talk about artificial intelligence and its impact on society, companies have started working towards the elimination of hard labor. From fast food chains like McDonald's to Warehouse operations utilizing tech like drones to check inventory, we can surely expect to see more autonomous operations being carried out in the next century. Education will surely sway towards one that is more IT inclined, something that will prepare the world for the fourth industrial revolution and the shortage of very specific jobs.