Plato was one of the few ancient Greek philosophers that defined the world of Western philosophy. Should you have the chance to interact with anyone born Europe, you would see that their way of thinking is rather different from us, here in Singapore. Chances are, the thinking of these people have been influenced by either one of the three philosophers – Plato, Aristotle, and Socrates.

Now Plato had a different way of thinking as opposed to his fellow philosophers. In fact, he was a student of Socrates and was encouraged by his teacher to challenge conventional knowledge that the public is quick to accept. After leaving Athens when his teacher was executed, Plato arrived in Sicily where he joined the Pythagoreans and developed his ideas on cosmology. 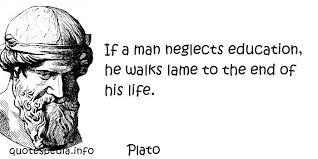 Of course, Plato’s works often involved universes where there would be an ideal which then allowed for an imitation somewhere here amongst man. This was why he believed that human existence was a result of beings falling from the high heavens and trapped here in this universe. As such, learning wasn’t really learning but rather a form of remembering something we had already known from our divine nature. This was Plato’s way of explaining why we were attracted to certain things in this world, recognizing the idea of “Goodness”.

Amongst these, humans are then essentially governed by one of the three natures – Passions, Courage and Thinking. Plato valued thinking as the highest form of the human nature. People that allowed their lives to be ruled by passion would forever be distracted by tangible, materialistic things and were bound to work for life. Meanwhile, others who lived their lives by courage had the job of keeping the world an orderly place. However, it is only the smartest, most intellectual beings that Plato placed high significance on, and only these people were fit enough to rule a country.

In a way, Platonism could be seen to be practiced in societies such as Singapore, where it is based on one’s merits, and most importantly, one’s intellectual prowess. Plato encourages us to think more, forming new ideas around existing ways of thinking. This could very well be implicit or abstract notions that are impossible to define, allowing users to form their own views on the subject. Considerably, Platonic thinkers or those that practice Platonism are thinkers that form “new” knowledge from pre-existing knowledge. They know and adapt the way they phrase their knowledge because it is fundamental to understanding and is as it is.

What we can take away from Plato is that knowledge in its core will always be knowledge. We should contemplate about it, think more about the essence of the concept and then apply it to our everyday life in a different way. We don’t have to be learning new ideas and concepts all the time, as with systematic learning. And it is because of this that we can safely say that the world is a much more interesting place to live in. So the next time you’re bored or simply killing time, remember to think more about the things you thought you already knew.