For the large number of you out there that owns a pair of spectacles or sunglasses, the brand “Luxottica” may seem like a foreign name to you. And rightfully so! What if you were told that Luxottica owns Oakley, Ray-Ban, Burberry, Chanel and a ton of other designer brand spectacles, would you believe it? Even more so, Luxottica actually owns a whole lot of other spectacle making factories and are the sources for lesser-known eyewear around the world. Luxottica is single handedly dominating the eyewear industry and monopolizing it, most recently merging with Essilor and having a combined market capitalization of 46 Billion Euros. Indeed, a grand feat that not many people have accomplished in the world!

So how exactly did Luxottica do it? It all started with the founder Leonardo Del Vecchio in 1961 where he was working as an apprentice tool and die maker. After establishing his first shop selling fully made eyeglass frames, Vecchio had the foresight and conviction to expand into the vertical integration of the business. After his process started, the rest was history as Luxottica had a series of rapid expansion internationally, signing deals with various designer brands. Of which, Armani was the first brand to sign with Vecchio, followed by various other Italian eyewear. This was not an overnight process, but rather one that was carefully planned out, using money raised from its sale of shares to acquire various other strategic brands. Soon, Luxottica acquired other eyewear brands and shops, increasing its retail presence and slowly gaining dominance. 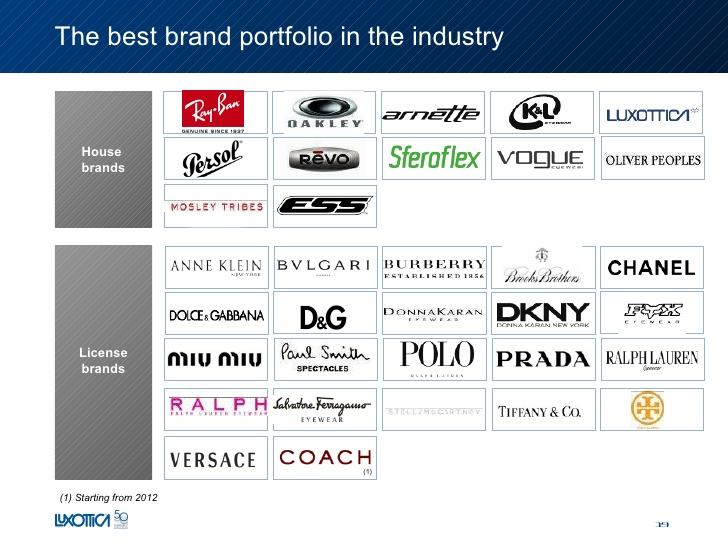 Of course, with a giant like Luxottica gaining traction in the market, there is bound to be competition that disapproves of its market share and control. Oakley was one of which, a company that decided it could no longer take Luxottica’s huge market control, tried to dispute their prices. Much to their dismay, Luxottica dropped Oakley from all their stores, in turn causing Oakley’s market share to collapse. With this opportunity in sight, Luxottica swooped in for a hostile takeover of the company, destroying the competition.

Impressively enough, Luxottica continued to use this tactic to intimidate and take control of the entire eyewear industry, raising its prices to a premium of around $200 to $300. When competitors get too large or out of control with their pricing, Luxottica simply cuts them out of their distribution channels. Now it may seem as though Luxottica is some evil giant out to rip the world of their hard-earned money, but that is not always the case. Brands like Ray-Ban were never so famous when they started out before being acquired by Luxottica. Back in 1999, you could find Ray-Ban sunglasses for just under $30 at any ordinary retail store. But once Luxottica took over, Ray-Ban came back as a premium brand that cost five times as much with demand skyrocketing.

So, the next time you decide to pick up some new eyewear, perhaps it would be good to reconsider getting a premium designer brand model. After all, all the eyewear models are made from the same manufacturer, only packaged differently every so often.